Who is Who on Matinicus Rock

Matinicus Rock is a sea-bird colony. This means that lots of sea-birds, including Puffins use this area to nest at this time of year. The land is near their food supply and is free from many land-based predators. There is little else living on the island besides the birds and grasses that you find here. That does NOT mean the island is free from predators all together. There are many birds who will eat either other species of birds or their eggs. Still it is safer here than it is closer to shore. The island has neighborhoods, just like New York City does. Certain birds live in a neiborhood. Arctic Terns nest in one area, common terns nest in another. Terns lay their eggs on rocks and grass towards the top of the island. Puffins and Guillemots live down in rocky borrows closer to the shore. In fact, sometimes Puffins and Razorbills can share the same hole!! Besides Puffins, who you know, let’s get to know some of the other residents here. 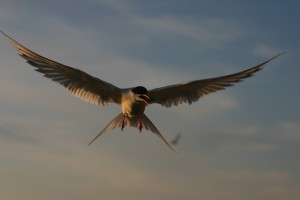 Arctic Terns are a small bird with a pointy red bill. You would never know that this little bird migrates all the way Antarctica and back each year! They migrate further than any other bird in the world. They do this by making several very long fights. Then they stop to feed on their way, feed very little as they travel. Would you like to see how they defend their nests when I walk nearby? Click here for a video. 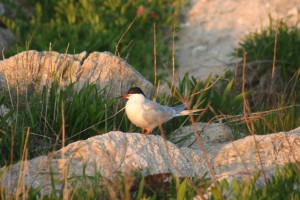 Common Terns are very aggressive terns that were long-hunted for their feathers, which were used in hats. Common terns were one of the first success stories of the conservation movement, which helped to bring them back. 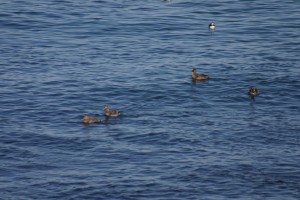 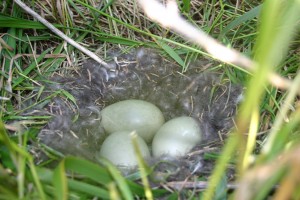 Eiders are a species of bird that looks very much like a duck. Here is what their nest look like. As soon as these birds are born, the chicks run right to the sea. All the babies will gather together and all the mothers will stay with all the babies until they are old enough to fend for themselves. 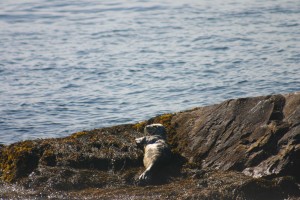 Yesterday a Grey Seal came by to rest and sun himself on the rocks near shore. This one “hauled out” for a few hours and seemed to enjoy himself (or herself) very much. 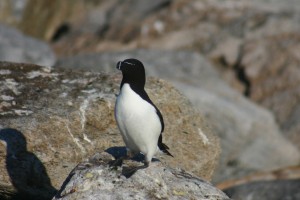 When Razorbill babies hatch, they only stay in the nest for 18 days or so. Then the males call them out of the nest to go to sea. The father cares for them in the water until they are old enough to take care of themselves. 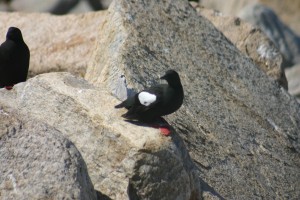 Unlike most birds in their family, Guillemots do not go far out to sea. They stay around the island and pick their food out from the rocks under the water near shore. They nest in shallow rock crevices near the shore. 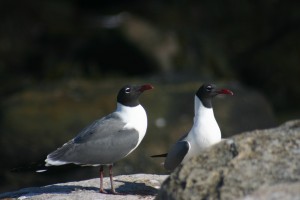 Here is one of the Gulls on the island. By the way, scientists do not say seagull, they just say gull. Many Gulls live in lakes or rivers, not the ocean. Does this gull look like the ones that live near us? Probably not. There are many different species of gull. This one is called a laughing gull because of the cackling sound that it makes. The other species of gull that are found here commonly are Great Black-Backed Gull and Herring Gull. The gulls are clever scavengers and they tend to eat the eggs of the terns and the puffins. The scientists here need to keep the gulls away from some of the species we are trying to protect. 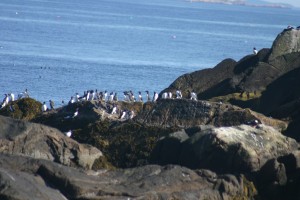 Murres nest on tall rocky cliffs. When their chicks are old enough to leave the nest and go to sea, the males will help them to the water. But since they next along cliffs, it often means the little ones have to jump off the cliffs to get to the water. Sometimes it is a very long way down. The father helps them in the water while the mother guards the nest so it can be used again in future years.

Did you find out the answers to yesterday’s questions? If not, find them today. You can also post questions for the scientists here. What would you like to know about this bird colony?

Question of the day: Why do you think birds live together on this island?

Here are the photos from today:

55 Responses to Who is Who on Matinicus Rock