Today I made it back to the Project Puffin base in Maine. I leave for home tomorrow. Many, many thanks to Steve, Debbie, Rose and “Puffin” Pete in 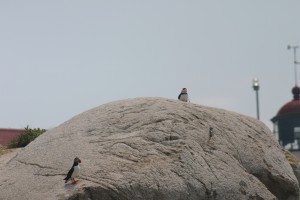 the main office and to Caroline and Nathan for being such great hosts out on “The Rock.”  Many thanks to Anne, Genevieve and Talia for being such great company on the island. What a wonderful experience this has been. Here are two videos for you. The first is when Nathan caught a laughing gull. We weighed and measured it and then let it go. Click here to take a look. The second video is our visit to our razorbill chick Coco. Thanks Cottage Lane for naming him. His name was officially recorded on the paperwork for that burrow. Take a look at how is is doing. He is growing! Can you tell how much?

As far as power, the solar system that runs our computers and lights went out.  We had no trouble living on the island, We really did not need electri

city to live.   Portable flashlights worked just fine.  I had three batteries for my computer and was able to use it up until the very last day, however I could not connect to the internet for longer than a few minutes, so my last blog post did not include video.  The system that powers the lighthouse belongs to the Coast Guard and we are not able to use it.  The lighthouse and horn worked just fine.  We could not get network and I lost power on my computer on my last day.  I brought three charged batteries for my computer, and did not run out. 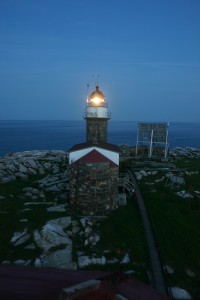 Mrs. CB, puffins are very social birds.  They stay together in colonies and frequently interact They shake their bills at one another and bang each other.   It is hard to know exactly what they are feeling when they do that, but what ever it is, they communicate it to one another very well.  They interact with people a little less than terns do (terns will let you know exactly how they feel when you get near their nests), but they interact a lot with each other.

The last few days were an amazing mix of Arctic Terns, Common Terns, Seals, Puffins and much more.  Here are some of the better pictures.  Can you find our stuffed puffin in the pictures on this page?  Enjoy!